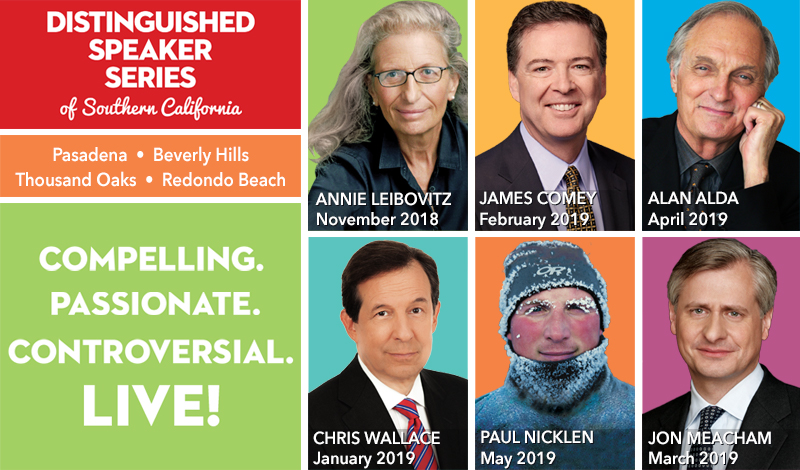 We are proud to officially introduce the compelling lineup of storytellers who will grace our Distinguished Speaker Series stages this fall! Read on to get a taste of what each speaker will bring to the table as well as some thoughts from our Series co-founder, Kathy Winterhalder!

Our 2018-2019 season will launch the first weekend of November with famed American portrait photographer, Annie Leibovitz. As one of the most high-profile celebrity photographers in the world, Annie Leibovitz has shot some of the most iconic celebrity images of the last 30 years – in the shape of world leaders and moguls, movie stars and rock stars. Can you imagine the stories she will share of being on set with these well-known figures? We can’t wait to learn her process and what was going through her mind as she was in the midst of some of her most memorable photo shoots.

Annie Leibovitz will be followed by Award Winning Veteran Journalist & Host of FOX NEWS SUNDAY, Chris Wallace, in January. Mr. Wallace, who recently interviewed Vladimir Putin, is a leading authority on presidential history and election politics. When asked by the New York Times if he’ll use his recent interview as ammunition to gain a sit-down with President Trump, Mr. Wallace replied: “Am I going to perhaps point out that Vladimir Putin sat down with me, so why doesn’t the president?” Mr. Wallace said with a laugh. “Yeah, I’m going to make that argument.”

Speaking of politics, following Chris Wallace will be former FBI Director James Comey. James Comey was appointed by President Barack Obama in 2013 to lead the Federal Bureau of Investigation as the seventh Director of the FBI. We’re sure not a week has gone by in recent months that you haven’t read or heard about Mr. Comey. His appearance with our Distinguished Speaker Series will be an exclusive chance to hear his side of the story, and gain his perspective into some of the more sensational political news stories of our time.

We’ll welcome Spring with Presidential Historian and Pulitzer Prize-Winning Author Jon Meacham in March. A skilled raconteur with a depth of knowledge about politics, religion, and current affairs, Mr. Meacham recently released a new book called The Soul of America: The Battle for Our Better Angels. Through this book and his time with our series, he hopes to help us understand the present moment in American politics and life by looking back at critical times in our history when hope overcame division and fear. If you’re looking for a book to add to your reading list, we definitely recommend his as you prepare for his visit!

It’ll be at trip down memory lane when one of the most enduring and beloved television figures, Alan Alda, joins our series in April. We’re sure many of our members grew up watching M*A*S*H! Like you, we can’t wait to hear him tell stories from his time on set. His recent announcement that he is impacted by Parkinson’s Disease was filled with hope and meant to raise awareness, and we’re inspired that he had the courage to make this very personal aspect of his life public in order to help others.

Our season will close with Paul Nicklen, who in 2018 was named National Geographic’s Adventurer of the Year. As our founder Kathy Winterhalder notes: “The biggest surprise of each season is always the least known speaker. Paul’s beautiful stories will take your breath away!”

You might be wondering how this season’s lineup came to be. Like all seasons, it’s YOUR voice that matters most. As Winterhalder goes on to say: “Honestly, our line-up this season reflects who our audience would like to see.  Each winter we survey our patrons with over 400 names of nation and world leaders, journalists, newsmakers, leaders in business, science, sports, arts and entertainment. We then take a look at the top 10% and see if they are available.  For at least ten years now, Annie Leibovitz had been in that category. We are excited that this year she accepted our invitation. James Comey was the #1 vote getter. We appreciate that our audience members embrace controversial speakers. We’ve prided ourselves in the fact that what makes our series unique is that instead of the media selecting the sound bites or quotes, our patrons can listen, submit their questions and decide for themselves. Also, after 23 seasons at this, we realize that our audience has very high standards and expectations from the presenters!”

Thanks to all who made their voices heard with last season’s survey –our 2018-2019 lineup exists because you willed it into existence!

Who are you most excited to hear speak and why? Tell us in the comments below!